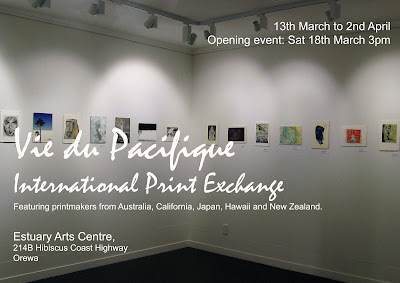 The project is an international exchange between print studios from around the Pacific perimeter and coordinated by  Jennifer Sanzaro-Nishimura and Jennifer Stuerzl in Australia. A group of five printmakers from Studio Printmakers were invited to take part and the inaugural exhibition of the exchange took place at Impress Studio and Gallery in Brisbane in November 2016.

The exhibition at Estuary Arts Centre includes the works of the printmakers from Studio Printmakers who took part plus a selection of prints from the previous exchange project including prints from Chile, Philippines, Vanuatu, Australia, Japan and New Zealand.

Artists were invited to "explore their relationship with the Pacific Ocean culturally, as a source of life and beauty, a source of food, an element of nature and as a place of travel and recreation. They could also take into consideration the dumping ground for human and industrial discardments it has become, and other environmental or political concerns."

The full set of prints from the recent 2016 exchange will be exhibited at
Whangarei Art Museum from 28th August to 26th September, 2017.
The full collection of prints will then go into the art gallery's collection. 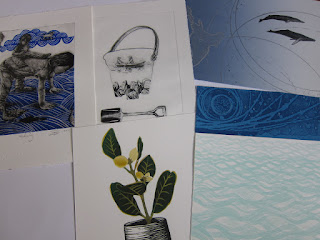 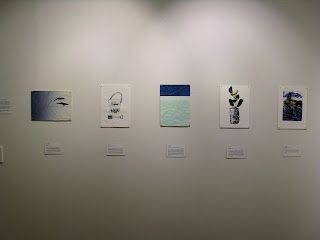 My statement for my work:

"Growing up in NZ meant I was never far from the sea whether we were in it, on it or under it. The sea is my anchor. It's where I feel grounded and where I return when in need of solace. It’s in my lifeblood through generations of seafaring folk. It’s integral to my identity as a New Zealander growing up with Maori mythology entwining our relationship to this land, Aotearoa and to the sea, te moana. To be at sea under an infinite sky allows me to put the woes of a modern world into perspective and to simply be in the moment."

I hoped to convey a sense of  my relationship with the ocean via an almost meditative quality through the use of printed and embossed patterning.

A selection of prints for the previous print exchange
are on display with the five recent works
until 2nd April, 2017. 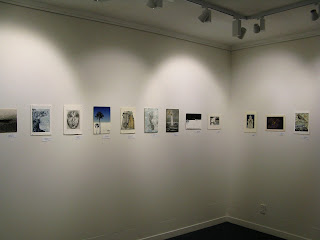 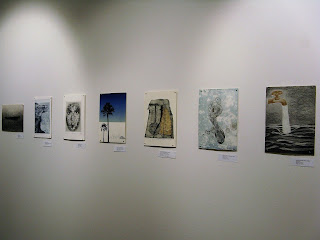 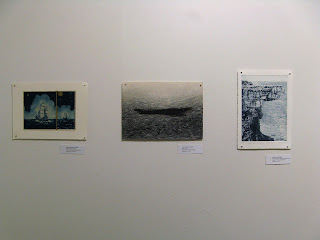 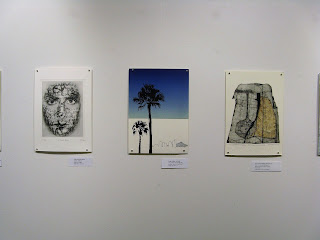 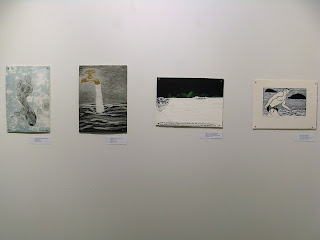 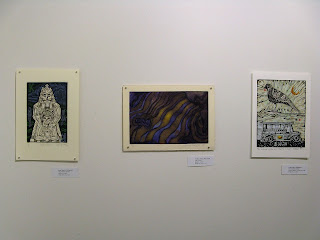 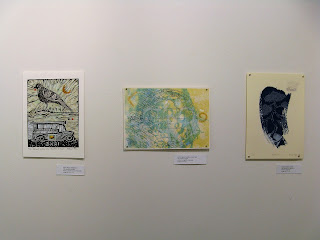 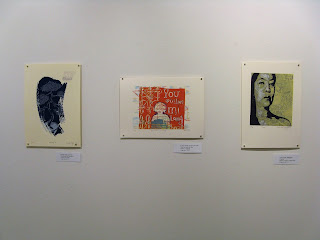 Thanks to Celia Walker for all her work in making this project
happen in New Zealand for the 2016 project.

Its always great working with you!

Posted by tonihartillart at 6:17 pm No comments:


Recently I was lucky enough to participate in one of a series of two-day workshops tutored by Arizona artist William Barnhart. The workshops were held at Studio Printmakers' studio where I am a member. This is a collective printmaking group based in Auckland, NZ. Visit their website to find out more here.

Bill is a painter, sculptor and printmaker. I first became aware of his printmaking when his work was selected as one of the winning artists for the 2015 Mini Print International of Cadaques. In this workshop he shared his techniques for drypoint, monoprint wiping and chine colle as used for his Mini Print works.

The morning of the first day was spent doing drawing exercises to free up our drawing lines. This began simply enough with drawing circles and ovals and moved on to continuous line drawings - a great way to draw.
The session ended with us all drawing with lengths of dowel taped to our wrong/other arm with a pencil taped to the end of the dowel. Definitely frees you up! And great fun too!

Next we moved on to watching Bill demo the process from whoa to go.


Then we got stuck in to create our own works.

I was pleasantly surprised with what I produced. I had gone along with some images based around themes I am currently working with and an open mind as to how I might use them.

Bill's process gelled with me and I found that I was able to translate his instructions into my own way of working. I had no idea what I would create in this workshop so it was exciting to see what I came up with - very different from anything else I have done, yet still "me."

There was a huge variety of works produced in this workshop and in the following one the next weekend. Great to see everyone shining through in their own unique ways.

Since the workshop I had a couple of days in my studio playing with the process further to see if it was all a fluke.

First I printed a variation on one of my plates created in the workshop.

I then created a series of mini prints from a new plate playing with colour, composition and wiping. I was also interested to see how well the plate would print multiple times.
So far it was holding up just fine.


I really quite like the "comic book" quality of these prints.
Something more for me to explore further.

A BIG thanks to Bill for his fun and inspirational teaching!


Posted by tonihartillart at 3:47 pm No comments:

The 2017 PCANZ Summer School took place in Auckland again this year at St Cuthberts College in January. The format was different from past years in that this time multiple workshops were run giving participants the opportunity to do a couple of different workshops over the course of the week. It also meant that more people could take part.

I took part in Lynn Taylor's mixed media workshop which included techniques using relief solar plate, encaustic wax and collage using found and printed papers and materials onto laser cut shapes. As anyone, who has been a participant in one of Lynn's classes, knows she is a fun and generous tutor sharing her expansive knowledge and many inspirations.

On day one we began by choosing our shapes and then printing and sourcing papers and textures to apply backgrounds and patterns to our shapes. 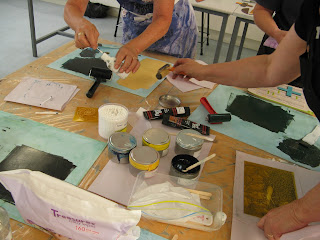 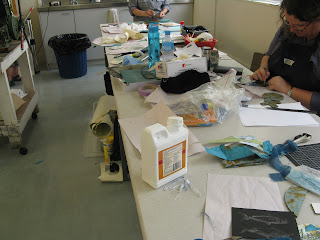 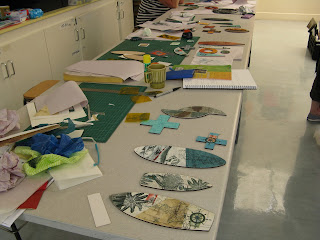 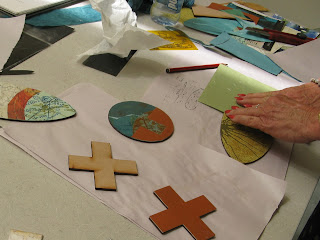 We also worked one-on-one with Lynn to learn the process of creating a relief solar plate to use in our work. Lynn must have run close to a half-marathon in the first day alone running up and down the stairs with each person to expose the plates outside in the sunlight! Amazing energy!!

Day Two began with a demo of using encaustic wax to add layers and effects to our shapes.

With 12 students in the workshop the room was a hive of activity and everyone created unique pieces using a full range of techniques and materials.

Having learnt some new skills and been inspired with new ideas and, as is oft the way with how I work, I took a bit of a detour from the main direction of the workshop and went off on a bit of a tangent, still using the shapes and layers of printed papers but diving off into a more sculptural approach.

With one approach, using the subject of the sea washing across pebbles I played with layering the printed surfaces at different heights, using different tones through printing on sheer fabric vs paper and playing with a horizontal structure vs a vertical structure.

The other piece I played with was inspired by my interest in the islands along our coasts. Using the same printed papers and surfaces, I used the structure of a painted rod of wood to form a horizon line and the shapes in the form of hemispheres.


This wee diversion was fed from some inspiration I have had percolating away for some time and so it will hopefully lead into a series of new works along this line.

Note to self: work on this idea to take it further!
Hopefully, watch this space!

Posted by tonihartillart at 2:01 pm 2 comments: