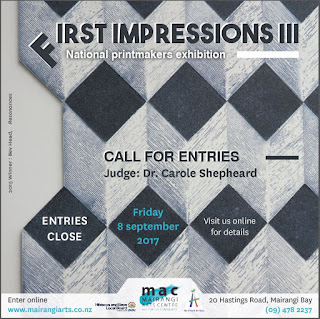 This is the third "First Impressions" exhibition and the second time I have taken part. The previous time I entered was in October 2013, when I was very new to printmaking. This time I had two works selected.

These works were something of a trial to create in that I had decided that I was going to push my comfort boundaries to create works that are bigger than I have previously worked in printmaking, and involved multiple experimental processes. I didn't have a particular image in mind from the start (a very new way for me to work), just a sense of trying to capture a place, (a real place: Karangahake Mountain), from my mind's eye and the accompanying emotion to communicate the message I was seeking to convey.

This theme came about as a result of another research-based project I have been involved with this year and which I will write about at a later date although this link will provide some context for my inspiration and why it has moved me to create this work. If you would like to add your voice to this very real and current concern, please visit the link to Protect Karangahake.

Working to this size is now possible because I bought a larger press! This one is actually a "real" etching press which allows me to do things I can't do with my mangle - a) because its bigger! and b) because the rollers can be raised or lowered, allowing for finer control of pressure. (This does not mean I will be parting with my beloved mangle any time soon though... just in case you were wondering.) 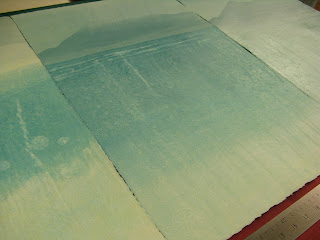 I worked on 4 prints simultaneously, building layers and responding to the marks as they were appearing. By working on 4 sheets of paper I was more able to be patient and to not overwork one piece for too long in a session. I was stressing the paper progressively by applying multiple layers of inks which needed time to be absorbed by the paper and so needed to dry between layers. As I discovered in a previous trial print, too much ink and the paper would stick to the printing matrix and begin to delaminate! It was a very fine line! It was constantly possible that I could ruin the image for any of a number of reasons, at any time. I worked hard to try to feel the fear and just go for it! Each print went through the press at least a dozen times. 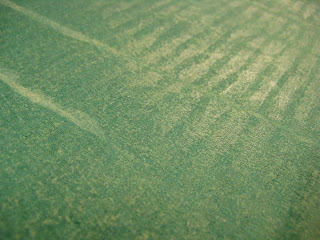 I used a combination of collograph plates, caustic etched lino plates, lino cut textures and monotype processes. The result is a more painterly approach to printmaking, a direction I have been endeavouring to explore for a while now and which I will continue to develop. I especially enjoy the effects that can be achieved with many layers of translucent inks creating a variety of sheens across the surfaces. They really need to be viewed up close to be able to see all the textures, colours and layers. It was therefore great that this exhibition stipulated for unframed works although photographing the works was a real challenge. As printmakers know, it can be very frustrating  peering at a print under glass, trying to decipher what the processes may include.

Below are my two entries to the exhibition.
There was a LOT of dithering, (one of my greatest talents)
trying to decide which of the four prints I should enter.

My statement for both works

Ohinemuri is the river, Karangahake is the mountain. The people of Karangahake are fighting for their mountain’s protection from mining, again. This is conservation land that is still recovering from the goldmining of the last century when the government declared the river a “sludge canal”. The river and the mountain are under renewed threat as New Talisman Gold Mines have consent to sample mine and are doing so right now. We do not need to search far to find many rivers and many mountains that are under similar, or worse, stresses.

According to Maori legends many of our nation’s rivers were formed from the tears of ancestors. These tears are joined by the tears of many as our waterways are continually under stress despite the cry that enough is enough.

Inspired by trying to capture the emotion of the tears, these images are built up from many, many layers of texture and colour, each layer responding to the layer before, each layer a risk-taking moment where full control is not possible due to the nature of the processes. How much ink can the paper absorb? How much stress can the paper endure? How do I know when to stop? How much is too much?

When is enough enough?


Following are imagesof the exhibition in the two gallery spaces.
Steve Lovett and Emma McLellan were on the selection panel
and the winning works were judged by Dr Carole Shepheard.

There were 70 works entered and 49 works exhibited.

The exhibition is hosted by Mairangi Arts Centre and runs until Friday October 20th. 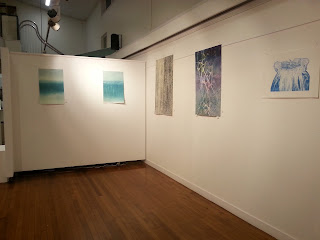 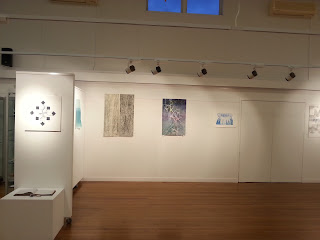 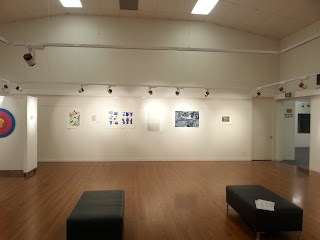 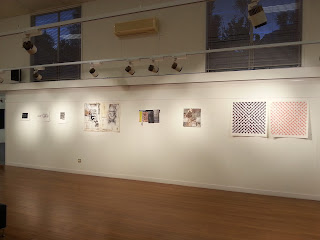 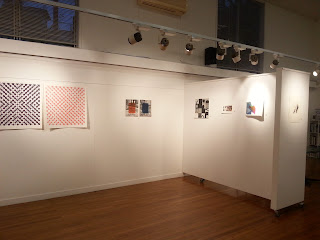 Below is a video provided by Mairangi Arts Centre.
It shows an overview of the exhibition.


To hang these works we were required to attach paper tabs to the backs of the works.
I explain how I did it HERE.

Hmmm, now where to present the other two prints?

Posted by tonihartillart at 10:20 am 2 comments:


As members of Studio Printmakers Celia Walker and I are currently exhibiting a small selection of works in the Tindall Hallway at the Lake House Arts Centre in Takapuna until October 28th.

Studio Printmakers is a collective of practicing printmakers who share the use of the onsite print studio at the Lake House for working on personal projects and as a communal place to gather to exchange ideas, attend workshops, organize exhibitions and meet visiting local and international printmakers and tutors. To find more out about Studio Printmakers visit the website HERE. New members are always welcome.

The Lake House Arts Centre recently approached our members and offered us the use of the Tindall Hallway to use as a permanent exhibition space for revolving monthly exhibitions. This is not an opportunity that comes up often, if ever, so we were more than keen to leap at the invitation. A small group of us donned our painting clothes and gave the space a spruce up armed with sandpaper, filler and paint.

The first two printmakers to exhibit were Vivien Davimes and Lianne Timlin setting the bar high with their beautifully presented works.

Celia Walker and I were next. We have both hung a selection of past works. Celia’s profile and more of her work can be viewed on the Studio Printmakers website HERE.

I chose to exhibit a selection of my rock pool images, created over the last 4 years and ranging from drypoint, to four-block woodcuts and my more recent linocuts. This is the only time these have been shown together and, I think, it is interesting to see how I have approached the same subject matter with different techniques for varying effects. Its also interesting to look back on "old" works.

“On display here is a series of works exploring rockpools, a favourite theme revisited over recent years. Inspired by the concept of falling “down the rabbit hole” as in Alice in Wonderland, nostalgic memories of rock pooling in childhood, and the engagement of a wandering imagination, Toni toys with the idea of what it might be like to enter into the miniature world of a rock pool. Are we, the viewer, looking in or looking out? Are we off on a new adventure or are we hiding from the world?”

We will take our work down on the 28th October and the next two printmakers will install their works. With over 30 current active Studio Printmakers members I’m sure this space will be put to good use and will be well worth stopping in to take a look at each time you are passing by. There is talk that we will use the space also to display collaborative, experimental and in-progress projects.

Please share this info so it becomes widely known
as a place to pop in to see what’s happening next!

And to support our printmakers.

Works are for sale via the adjacent gallery shop. 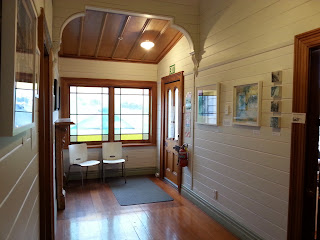 Posted by tonihartillart at 3:22 pm No comments:

Boundless - Printmaking Beyond the Frame - An update 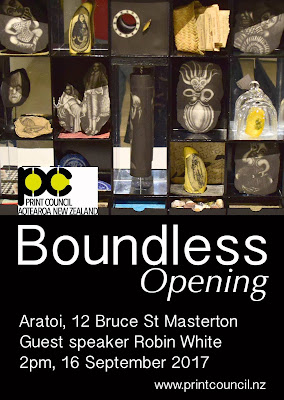 I have not been able to see the exhibition in person yet as it has been down country but I hope to catch it when it travels to the Waikato Museum 4 May - 15 July, 2018. In the meantime I was given a copy of the beautiful catalogue for the exhibition, in the weekend. It is a wonderful record of the show and a chance to read more about each of the works. It also includes the introduction by selector Dr Carole Shepheard. 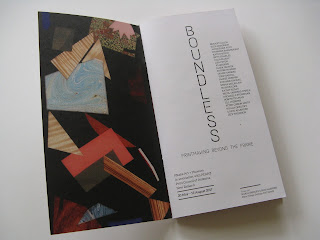 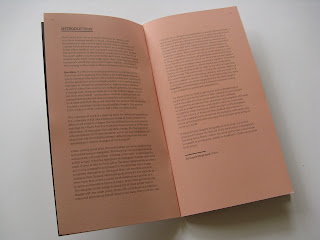 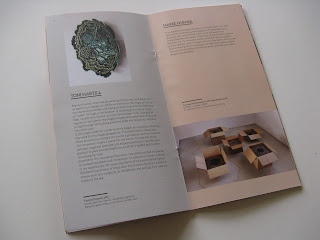 My 3D linocut rockpool "There Be Treasure"
was selected to be in this show.
You can read more about the process of making this,
and the exhibition,
in a previous blog HERE.

Posted by tonihartillart at 4:59 pm No comments: